Behind the Scenes with Sicario 2

We’ve had some great opportunities to showcase FLIR technology in media, and the past year has seen some great uses in some big movies and television programs. The latest season of “Homeland,” “Rampage,” and “Sicario 2: Day of the Soldado,” all featured some excellent sequences using FLIR cameras. Sicario 2 involved integrating the camera into the picture helicopter – the gear was used both as an on-screen prop, but also to capture imagery from that was featured prominently in the opening scene of the film. Check out that scene above as well as the behind-the-scenes feature we were able to share on the FLIR YouTube channel. 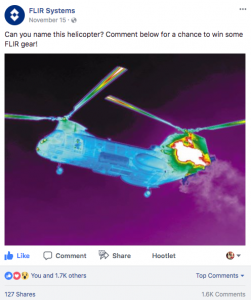 Where in the World is Vatche?

Been a while since I’ve updated! Since April of 2015 I’ve moved into a new role at FLIR as the Social Media Marketing Manager for the company. I manage all of FLIR’s social media brand channels, including Extech and Raymarine. Taking on the role has moved me out west to Portland, Oregon! A long ways from Boston!

It’s been an amazing year – ending with bringing FLIR’s total audience on Facebook from 28K to 100K in just a few months. We’ve generated some great content in the second half of 2015 – bringing our total social brand impressions to to over 50 million (around a 1,000% increase Year over Year!).

As I settle into the new role, I’m looking to get back into the side projects! It’s been a while since I’ve posted any fun little shorts, so definitely looking to do more, as well as pick back up on some in-progress projects. More to come soon!

It’s been a whirlwind few months over at FLIR for new Video Content. One of the latest projects I’m really proud of is the 30 second spot I produced, shot, and cut for the new FLIR C2. The main goal was to drive the point home that this was an exciting product, especially from a form factor standpoint.

Also – a big event this month was CES. I created wall-to-wall coverage cutting 10 videos during the event that were used on FLIR’s social channels. See some of them below!

Another exercise in cutting to music. I took some archival footage/informational footage from the US Department of Energy’s films on what to do in case of a nuclear bomb. I’m fascinated with films like the classic “duck and cover,” films they showed school children during the 50s and 60s. I cut it to a song from Steve Aoki, Diplo, and Deorro.

Wanted to share one of my most recent projects at FLIR. We recently became an innovation sponsor of the Infiniti Red Bull Racing Formula 1 team, which gave me the opportunity to fly out to Bahrain to get some Infrared B-Roll of the RB8 and RB10 cars for our initial announcement. In late July, our team from Sweden had a chance to grab even more thermal footage of the cars, specifically, with one of our higher resolution science cameras. When I saw the footage, I thought it’d be a great opportunity to put a short clip together to share on social media. The timing of our release couldn’t have been better, as it was right before Formula 1 was returning from their summer break.

We reached half a million views in a week and two days. Successful video!

Wanted to give a mid-summer update! Check out this short branding video focused on Extech’s Air Quality Meters. I recently did a major overhaul of the Extech and FLIR T&M Youtube Channels that implemented much of Youtube’s new social features. I’ve seen a decent increase in subscription and interaction since the changes.

In addition to this branding video, I’ve posted 5 new Product Showcase Videos to correlate with the air quality/temperature products.

Been a busy month! Covered the Independent Film Festival of Boston once again for LonelyReviewer.com. We shot a ton of Q&As, some of which can be viewed here. We finished the first season of Boston Open Screen at the Coolidge last night, taking a hiatus for the summer. Also, I just put the finishing touches on something that had gotten lost deep in my vaults, “The Interview,” a little piece I shot back in 2011. Lot’s of good stuff in the works!

In testing and familiarizing myself with the Blackmagic, I’m filming little moments/situations/environments with the new 4K camera. This latest short I shot in my Uncle’s small Garage/Workshop. Lit only by two overhead fluorescents, and the first shot in a dark parking lot, the images this camera puts out have a lot of life.