The Gift of Winter

Synopsis: “The Gift of Winter” was adapted from a feature film written by Vatche Arabian. It is the summer of 1937 in this Soviet Gulag, and two prisoners, Charents (Max Flisi) and Karapet (Arabian) are in the midst of a hunger strike for their rights in the prison. Through their conversation, we learn what keeps them alive, despite their hunger, and torture. Their bodies may be incarcerated, but their minds are free. 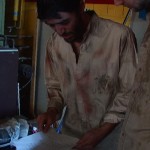